Roger and I met at Mt Bryan township early on Saturday morning to activate the two local summits near by.

The wind was blowing quite hard when we first headed for the hills and by the time we arrived at Mt Cone it was extremely strong, and we had to hide behind the comms hut to shelter and make it at least possible to even activate.

The antenna was only put up to 6 metres as it was bending badly and I remember Paul breaking his squid pole a few years ago on Hallett Hill in similar conditions. 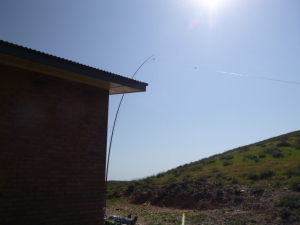 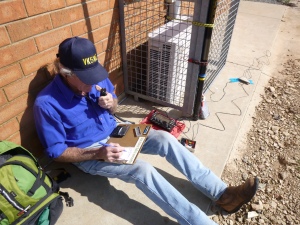 Roger vk5we worked the pile up on 80m first then it was vk5cz turn, then Roger went back onto 40m ssb to hand out a few more points for our regular band of faithful chasers. I went onto 40m cw but only made 3 cw contacts but I managed 6 ssb qso’s before on 80m ssb, it sure is worth using that band these days to give the local chasers and us a chance to qualify.

After a battering from the wind we packed up and descended back to the farm yard for smoko and a chat before heading across to Hallett Hill only a few kilometres away.

I think by the time we got onto the Hallett Hill range the wind was even stronger and we took the road through the wind farm to get to the actual summit. There are a few gates on this property to open and close so this time we took Rogers car so I could take a turn opening the gates. Well we stopped at the first set of gates and I was on the windward side in the car and I could not open the door, firstly I though maybe it was locked but no it was the wind holding it firmly shut. Roger had to turn his car around so my side was out of the wind to get out and open the set of double gates, then once I was ready to get back in he had to park the same on the other side of the shut gates. 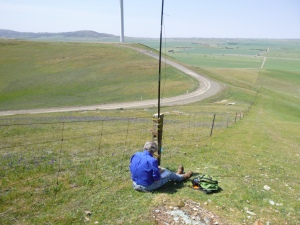 We set up on the northern fence line across the top of the summit as best we could to get some protection from the wind, we did not have much luck with 80m so Roger and I both used 40m with quite good results. He had several chasers on 40m ssb and I had a nice pile up on cw then it was pack up and get out of this raging gale. No hats or inhibitions with hair styles worn on this summit. I remember the first time Paul and I went there the wind was not quite as strong but it broke Paul’s squid pole in two places and it was 4 degrees extremely cold.

That will be the last summit Roger or the two Ian’s will do for this season so I hope they can do more summits and work you all again next year. I have 7 more on my list for this year but I think the early summer will beat me on the Hawker summits.

Thanks to the chasers and land owners for access.

Getting close to 5 years of SOTA in vk5, this time back then I was busy getting the summit list organised and finalised with the SOTA Management Team in the UK . It was an exciting time but also some nervous tension involved hoping and making sure I had all the relevant information for the MT to upload to the SOTA database, and the ARM written properly as I was to take on the role of Association Manager for vk5. My new KX3 had arrived and I was keen to get out on a summit and be ready to go when the first day of October rolled around.

This weekend I was a couple weeks earlier for the anniversary but today was my chance to get back to Mt Horrocks again. I now have to ask a new land owner for permission but he was very good and allowed access for me to make a hike in from the western side of the summit which is right on 3 km from where I parked my ute. I probably could have driven closer as the gate was not locked but it was a good easy hike at this end of my SOTA season and I only asked permission to hike in anyhow. 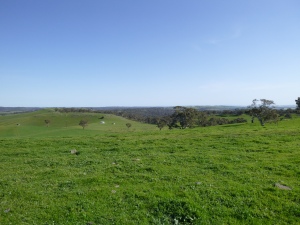 With great all around views from the top.

It was quite windy on top so I set up down a bit on the southern side this time using the 20/40 link dipole with extensions for 80 run out to use first.

After it died down I went to 14 Mhz to find ZL1BYZ waiting for me on cw and he asked me to try ssb and I found ZL1WA on ssb who had a nice signal as well.

A nice way to spend the morning without having to travel very far from home is a nice change for me.

Thanks to Ben the very helpful land owner and all the chasers today doing a good job under poor band conditions. Thanks for reading my Blog.