Hugh and I took Friday off work to have enough time to activate 5 summits near Yunta, about half of the summits along the Barrier Highway. We headed off quite early about 6 am from Farrel Flat and took the road via Mt Bryan East this time as it was dry. It took over 3 hours to make the parking spot at the base of Pualco Hill so we were a bit behind the Spot time on SOTA watch but did our best to be there asap. 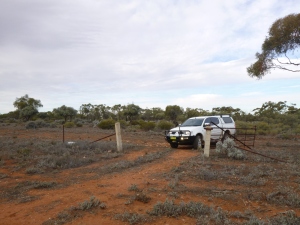 One of the many gates to open along the way, with only about 10 km to go . 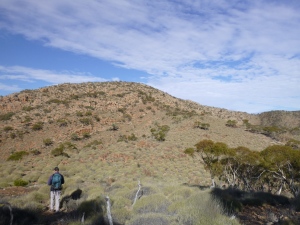 That’s the summit about 40 minutes to hike with a rock scramble up near the top . 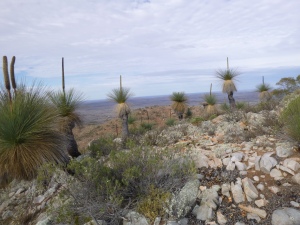 Biggest Yacka bushes I have ever seen, very healthy specimens . 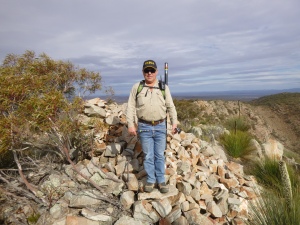 The stone cairn has fallen down at the top.

Hugh made some 80 and 40 metres ssb contacts then I took over and made some good contacts on 40m cw .

Heading back down off the summit we stumbled across an Emu nesting in the Spinifex grass, lucky He took off in fright and did not attack us. 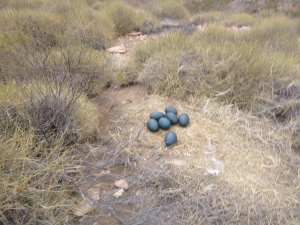 Over night in Yunta Pub we left quite early to head to vk5/ne-095 known as the Bluff by the locals, the first summit for Saturday .

A really nice sun rise before we hit the dirt road to the first summit.

Part way up to the summit which is about 1 hour to hike . 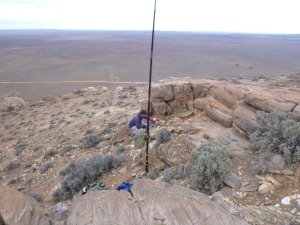 We set up behind this ledge out of the cool southerly wind.

Made some good contacts on 80 and 40m again this time working VK2UH on his brand new MTR rig, much excitement as it was the first qso with this rig, Andrew had a great signal at 3 watts of out put.

Not many contacts on this hill as we were quite early but we both made the score and qualified.

After the hike back down we headed off on station tracks to Oulina Park homestead to meet up with Michael and head to the next summit Oulina Hill. This summit is a drive up with a 4×4 track to the top which Mitsi did easily now we have the right line worked out for a rock ledge on the way up.

I only got a couple photos as the battery in my camera gave up again although I suspect it has a fault somewhere else because it has failed several time since I bought it.

We both worked vk5is and vk5wg on 80m even though it was after lunch by the time we made the summit with a small number of chasers on 40m ssb and cw. This time we gave Hugh’s KX2 a run which worked fine with his link dipole .

Hugh working the pile up on 40m ssb

KX2 is a great rig amazing how much smaller than My KX3 it is.

Was intending to take a shot of Mitsi dropping of the famous rock ledge on the way down but camera had other ideas.

We headed back to Yunta via Oulina Park property travelling about 80km of station tracks and some better made roads  nearer to Yunta.

We headed out Early again Sunday Morning to Teetulpa Station this time west of Yunta our first summit was Waroonee Hill. This is a great summit about 10 km south from the main road west of Yunta so we have some station tracks again.

We need to hike about 3 km along the bottom edge to this rock uplift to make the summit on the northern end, it is a stony path made by goats but a nice easy hike once you get up on the path. 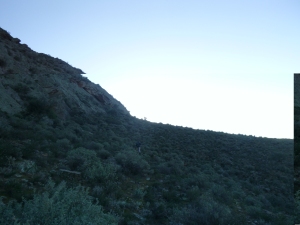 The way to the summit is at the end of this rock face. 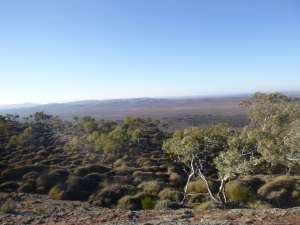 Some scrub on the top and Spinefex Grass, looking out to the East.

Top of the ledge looking Southeast .

Back to Mitsi for the drive back to Teetulpa Homestead to meet the manager then we went north along station tracks heading for Karkala Ridge summit.

There are several gates on this trip and about 20 km of tracks to get there. We had a 2 km walk from the parking spot after some lunch.

Gradual hike along the ridge to the top.

Even though it was middle of the day we both made enough qso’s on 80 m to qualify. Hugh worked a pile up on 40 ssb and I made 12 cw qso’s on 40 m and some double ups and other qso’s on 20 m cw this time. Got to work Andrew again with his new MTR this time on 20 m with great 2 way signals. We used the KX3 this time and my 20/40 link dipole with 80m extensions. This antenna has been the best for me so far .

We had well over 600 km on the speedo by the time we got home Sunday night with 5 summits crossed off the list for this year.

Thanks to all the property managers and thanks to the chasers.

Thanks for reading my Blog