The plan to go to Mt Arden this weekend to do some repeater repairs was called off until next week so I decided to do some closer in summits. I still managed to drive 220 kilometres on Saturday visiting Lagoon Hill vk5/se-008 in the Tothill Ranges then drive out west to Illawarra Hill vk5/se-014 for the afternoon activation.  When I arrived at Lagoon Hill, farmer Jeff gave permission to drive a bit closer than I normally do around the edge of his cropping paddock which was only sown on Friday and was a long way from sprouting. This makes it about a 2 km hike up and back with a hat on backwards climb up through the rocks and Yacka bushes that grow on this really steep slope.

SOTA transporter parked I follow this fence line to the “marked public easement” which consists of two large stones.

How ever I have to comply with this land owners wishes that is a private conservation group who are the owners of a lot of land in the Tothill Ranges. The trig point and easement to the summit is not owned by them and the public access easement is still open to the trig point. Bit political but it gives me access to an other wise access denied summit and they are happy for me to go there if I follow the rules. The easement being a line on a map does not mean it is the easiest path to the top thus the hard slog straight up the side of the hill but nothing I can’t handle. 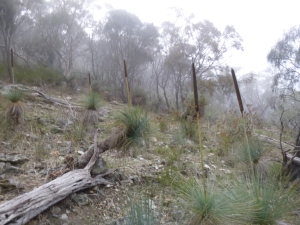 Very foggy  but no rain made it a nice cool morning for the hike to the top . 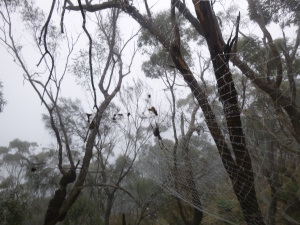 Nearly walked into this spider web up in the trees . 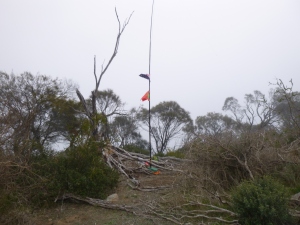 This is the clearest spot to set up although my antenna with the 80m extensions still run out across the bushes.

No problems to make contacts with it .

So after working the locals on 80m ssb I worked some vk2 and vk3 chasers on 40m ssb, I found Paul and Marija up the band in a conservation park  VKFF 1690 and had a contact with them. VK7CW was my first QSO on 40m cw, with some other chasers from vk2 and ZL1BYZ on 15m cw and ZL3CC on 20m cw. I saw some spots for a couple JA stations on 15m cw but I could not hear them so I packed up and made my way back down to head off to the next summit.

This summit is only a one pointer but a score none the less taking me to 660 activating points now. Its probably 80 odd kilometres to drive between summits with some dirt roads to fill in between the major roads .

But I made it with enough time for lunch and a coffee break before the long 100m hike from the Ute. This summit has a wind farm so there is a well made road to the top of the treeless hill. 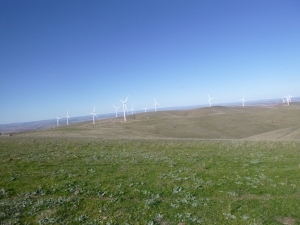 Last tree standing makes for a good spot to set up.

Once set up I made two QSO on 80m this time before heading to 40m ssb to find my group of faithful chasers from vk3 and vk2 ready to work me. Then vk 7 2 3 6 and ZL1 BYZ again this time on 40 m cw. Being such a nice afternoon I decided to try 30 m using my 20/40m link dipole as an OCF by unclipping one of the 40m links. The kx3 had no trouble to tune it, and at a guess the feedline loss would not be too bad as it displayed a 3 t 1 swr before tuning on the kx3. Well the results were quite good I got good reports from vk4rf, vk2io/m and zl3cc and I could hear some EU dx as well but did not work any. It was cooling off quite rapidly so a short CQ on 20m netted HB9AFI to top off a great day of activating.

That’s not my antenna in the back ground.

Thanks to all the chasers on both summits .

Thanks to the land owners for access to your land

Thanks for reading my blog.