Seeing there were thunderstorms around Orroroo last week and after consulting with the owner of Black Rock property, he granted permission to go to the summit. I picked Hugh up early Sunday morning and we headed off to the summit arriving about 8 am. It was still nice and cool with high humidity as we were going to drive through some very long grass as the track to the summit has not been used very much lately.

Low range in the Colorado we gently made our way to the parking area near the peak and never found any surprises in the long grass on the stony track to the top . 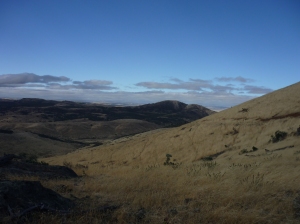 That is Depot Hill across the Valley, we missed doing that summit in 2016 on the last trip

SOTA transporter parked and after a feed and think about where to set up, it was very windy and cold for middle of summer.

We decided the best place out of the wind would be under the rock ledge up near the top on the North Eastern side of the summit. It was about 30 minutes to hike around the side of the Summit on a goat track and slowly make it to the top. It was extremely windy so we never bothered to go to the actual trig just for a photo opportunity as it was time to set up and get the activation underway before UTC roll over and try to stick to the Alert Time we set.

View out North West at some of the summits we activated early in the year We are very lucky to have access to all summits around Orroroo but one which I hope to do some sweet talking to the land owner and get it back on our list. On the first year of SOTA in 2013 we accidentally entered his property after gaining permission from the wrong land owner and got sternly asked to FO and not come back. Might ring him and ask him for next year might not.

Well the reason to get a summit in the log New Years Morning is we have a time window that we can turn one visit into two Activations before and after the calendar year changes in UTC time. Many VK Activators do the same every New Year as we are in a prime time zone for such an activity. Its also a great way to get a double score and get two Activations into the one visit to a summit. 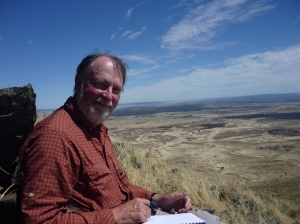 Hugh is ready to start logging as many as He can work, I am not sure how many Activators were out on summits but we made 9 S2S before role over and 5 after. We never had time to search around the band because it was very busy working S2S and chasers who came to the frequency we used for the whole activation. 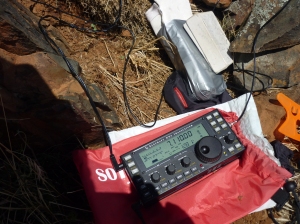 Used the KX3 this time and my link dipole with the 80m extensions to start out and glad we did because Nev VK5WG could not hear us on 40m . 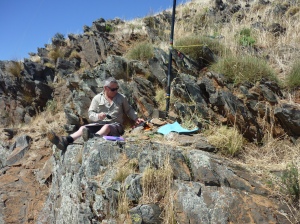 Perched up on the ledge it turned out to be quite warm out of the wind. For a change 40m was working well to the Eastern States making it possible to work lots of S2S and chasers and catch up with everyone for the end of the season. 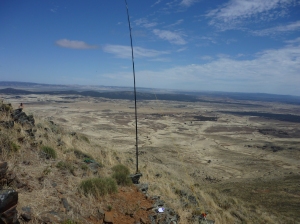 Birds eye View of the Squidy and SOTA beams link dipole and our ledge for the morning below out of the wind ,

Thanks every one for all the contacts and it was quite a job to upload the csv logs, sort out the S2S part of logging, edit the video for Facebook and get a Blog written up. Judging by all the SOTA activity over the day I bet lots of others have been busy logging too.

Thanks to Peter for permission to enter his property we hope to get there in a better part of the season next time.

Thanks to all the chasers and activators for the contacts.

Thanks for reading my Blog .