This weekend in October was my last chance to get to Black Hill before the weather starts to get too hot.

It ended up being a 596 km trip but I started out on Friday after work and drove to Orroroo for another overnight stay in my favourite caravan park. Up early Saturday morning for the rest of My journey to Black Hill which is about 130 km from Orroroo. I found a short cut half way between Carrieton and Cradock which turned out to be a well maintained road across a pastrol lease property. Lots of Kangaroo activity in the early hours of the morning, I had to slow down several times to let them get out of my way and avoid hitting any. The road then enters Holowillena Station and winds through the hills for several kilometres before Black Hill becomes into view. 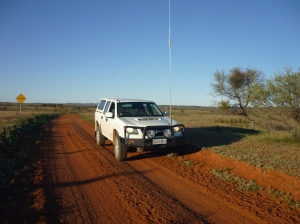 I am north of Holowillena Homestead now and it if time to make a sked contact with Ian VK5IS on 3680 kc . I use a Hustler loading coil on this extra long aluminium shaft which works very well. I don’t drive along with this antenna on it’s a bit too long but I needed a stop any how as my Porridge was ready to consume for a bit of carbo loading before the walk I was about to do. 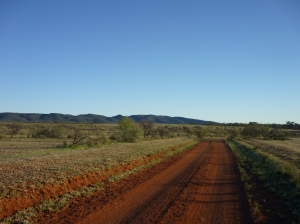 A well used track by the look with Black Hill off in the distance . 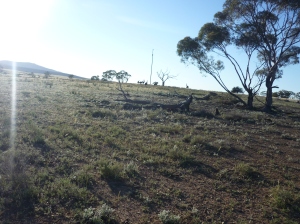 This mob of Emu’s were standing around as I went by it’s the best photo I could get they did not wait for me to get a closer photo . 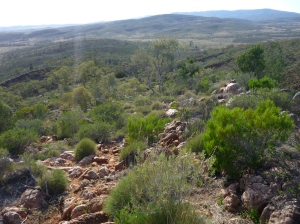 Well into the Hike by now very rocky with lots of low bush and spinifex grass the SOTA transporter is down below parked off the road in a creek bed. I think where I park, the land is leased by another station further north, so I hope it’s ok I did leave a note at the Ute but I did not see another person at any time out there. 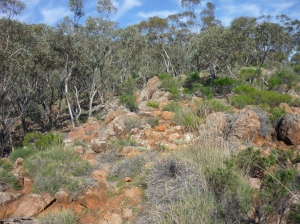 Stony up lifts running at a differing angle to the saddle makes it tricky as they get higher on the ends and before you know it is too high to get off back on track. lucky the goats know where to go and I could follow their path mostly. 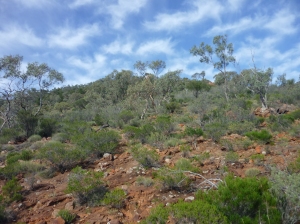 This part is quite steep and slow picking through the bush and rocks but the summit is now in sight and I think I arrived very close to my Alert time but there is no Phone out here so once again I asked Ian and Nev to listen for me on 3680 kc . These days with low propagation on 40m locally I have been starting my activation’s on 80m so I set up right from the start then unclip the extensions and get on with 40m later . VK5IS VK5NWE and VK5WG called me on 80m  the band was very quiet none of the usual static crash you might experience on 80m. But they all had very good signals and my log was under way. 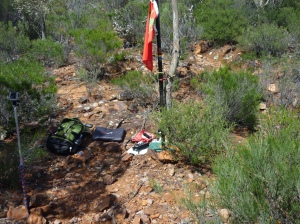 My set up in the bush was ok but there are not many places to hang up a dipole in clear space, part of the antenna broke from getting caught on something when I was swapping things around.

It was quite pleasant to start with but the wind was building and I had to deploy another bungy to help hold the squidy in place.

When I started on 40m I was unsure what would happen with no phone coverage to Spot but Ian VK5IS set up a Spot for me and I had 5 quick QSO’s waiting in line for me which was great. I made a S2S with Andrew VK1DA/2 and Matt VK1MA/2 chased me up for another S2S . Then VK3PF,VK3CAT and VK3SQ were soon in my log. After a few CQ calls on 15m with no signals even heard I did a swap to 20m with no respons to my CQ calls. In that situation sometimes the RB network will pick up a CQ SOTA on CW and Spot you on SOTAwatch but nobody answered me so  I decided to pack up and head down. 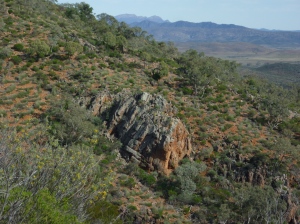 On the way down I noticed Wilpena Pound and the ABC Range off to the north .

Got back to the Ute ok and found todays walk a bit easier than the first time Hugh and I came here and tried a different way to make the top . Now for the 300 tired kms home .

Thanks for the contacts everyone

Thanks for reading and taking an interest in this obsession SOTA .