We finally got a chance to get to Waite Hill VK5/NE-066 again for some more Huffing and Puffing on the climb to the summit.

It starts out right from where we park the Ute so there is not really an easy way to make any ground on this summit,although it does get easier eventually as you get to the top of the range then we just pick a way along the top for a while . 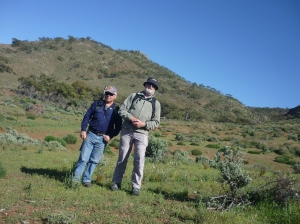 We are about to start the climb to the summit  which is the further est hill in the picture.

Hugh normally set the pace on the climbs and I puff along behind, this time I shot some video to put on the SOTA face book page, now that I have come to terms with the editing software from GoPro. 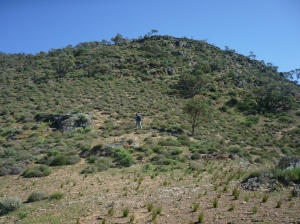 Once we get this jump up behind us the climb becomes more gradual along a rocky goat track. 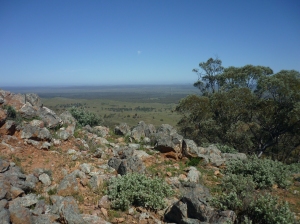 It’s great when you make the top of the range and can see the other side, most of the hard work is done by then. 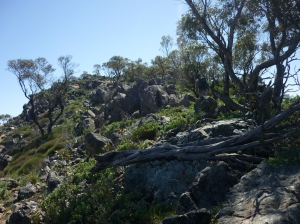 Last rock scramble to the top then it’s SOTA time. 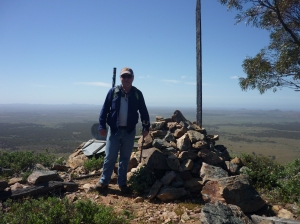 Hugh’s good work at standing this post up in the rocks has survived 3 years so far .

So on with the activation report.

As usual with activating first I had a small pile up but when Hugh went second the chasers dried up.

In future I think Hugh should go first and work the pile up then I can fall back on cw if the SSB chasers head off to find someone else to work. Thanks to the chasers who put spots on for us too we had a patchy link to the phone out there but it was mostly good. Getting to the summit is a bit of a challenge at times and meet the deadline of the original Alert, this time I think we missed by about 30 minutes. Hey its the weekend and this is supposed to be a fun activity.

It was a very low score for both of us really, we didn’t run out of log pages on this one.

40m to vk3 was probably the best path, we had some contacts to Mt Gambier again which seems to be a good skip distance as well.  VK5IS was my only vk5 contact on 40m, Hugh worked VK5EE on 40m then we had to add the 80m extensions to the dipole and worked VK5WG and VK5MBD on 3.680 with good signals. 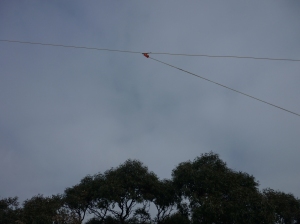 The extensions for 80m are clipped onto the ends of the 40/20 link dipole then run out further using their own end strings to tie off beyond the ends of the 40/20 dipole. It works really well around vk5 from our experience lately and brings in locals as you may expect to copy them on 40m under good conditions.  Sorry we did not try 20m it was getting quite hot and windy with the northerly change blowing in plus we had another track to check out on the way home to try to shorten the trip to this summit. On the Western side of the property we meet another road which ends up on a track just near the southern end of this range of hills and if we could get permission to enter from there it would cut off about 28km of road plus 15 km of station tracks and several gates to open and close . But it’s a work in progress Hugh did get the land owners name out of the rather wary farmer we spoke to who was his neighbour. But that is fine if it happens it will save us time and travel that is all, we still have to climb that hill.

Thanks to the chasers and spotter who made the activation achievable

Cheers from Hugh and Ian