Hill se-006 is an unnamed Summit in the SOTA program, we often have Summits like this and just refer to them by the SOTA reference. After an un eventful dusty drive back from Waite Hill we found Hill se-006 just east of Whyte Yarcowie up a dead end road into the property. We saw many Kangaroos here I recon its the most I have seen in one mob in a long time . The track to the summit was quite easy to get along and we headed up to the top of the hill picking a line along the saddle which was quite easy this time. One thing that was new was we had to take a sledge hammer and our own picket into the activation zone as this hill has not trig or trees. We did find a Box Thorn bush on the western edge so we set up there. 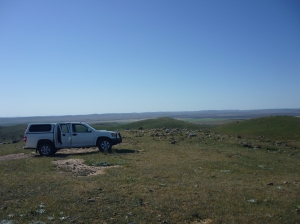 View to our morning summit .

View south from the edge of the summit wind farms way off to south. 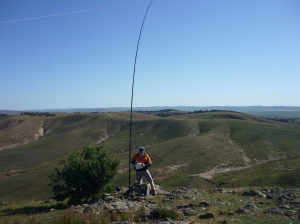 Hugh setting up we had a great take off point and antenna was up high.

Working the pile up.

Hugh made a nice score this time on 40m with band conditions still a bit hard on the closer in stations so I just went to cw when my turn came about. I worked several of my faithful chasers in vk 2 3 4 7 with vk7cw Steve sending with his side winder key which sounds like a bird singing in a tree to me. I don’t hear many on this type of key but as Steve is a master of it, it sounds really nice, bit like a bug key but better I think. Being early morning in Europe I went on 20m cw and straight away had a pile up of EU stations chasing with good signals so it was great to be among the dx after a long spell of poor conditions or timing on the summit. John vk6nu found me this time as well which was my only vk station on 20m and 40m was no good to the west, so glad you found me John. After the rage died down and I run out of EU chasers I went back to 40m ssb to find Nev waiting for me on the ssb frequency and to our surprise he was 20 over 9 this time but an hour before there was no chance of a qso at all. In the quiet location on the summit Hugh could hear Nev but he was not responding to us so we put it down to really high noise and low signal at his end. Adrian came up as well as he was waiting there as well to see if we came back to ssb from cw.

We travelled 360 km this trip which is shorter than usual but with band conditions much better it ended up being a great day out.

Thanks to our band of chasers and land owners for the tracks and Hill.